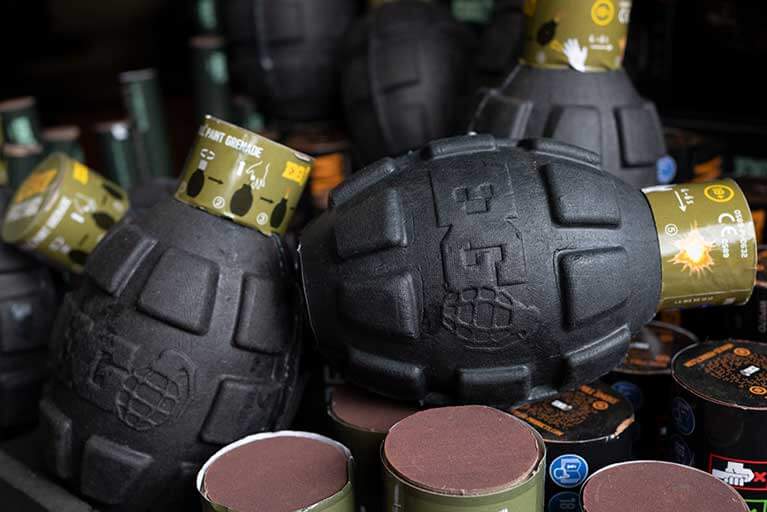 Add some tactical atmosphere to your game, event, wedding or video with the awesome Enola Gaye coloured smoke bomb / grenade!

Smoke grenades are available for use on site at NPF Bassetts Pole at 3 for £10, and also available for purchase for use offsite at 3 for £15 - subject to providing proof of identity and appropriate business credentials. Just give us a call on 0121 323 1000 to order.

Some popular uses for smoke grenades can be:

All other pyrotechnics are only for use on site at NPF Bassetts Pole.

Add some tactical atmosphere to your game.

The corner stone for game play in the UK - simple and easy to use!

Explodes with a bang and spreads paint in random directions!

With an effective blast radius of 5 meters+ your game will take a step up with an EG67 in your pouch.

RULES OF USE AND SUPPLY. WHERE CAN SMOKE BOMBS / FLARES / GRENADES BE USED?

Products must only be used in areas where you have permission to use them. On private land this would be the land owner. If it is public land this will be the local authority. Wherever they are used, it must be in areas where there is no risk of causing concern to the public. If used in public places, approval from the local authorities and emergency services must be sought before use.

It is illegal in the UK to use any pyrotechnics including Enola Gaye smokes in football grounds, sports venues, public highways, nightclubs, festivals regardless of any permissions given by the organisers. We do not condone or promote the use of Enola Gaye pyrotechnics at any of these or similar venues.

“The guns were kept in good condition, and the upgrades all looked and performed impressively.” Lawrence Campbell